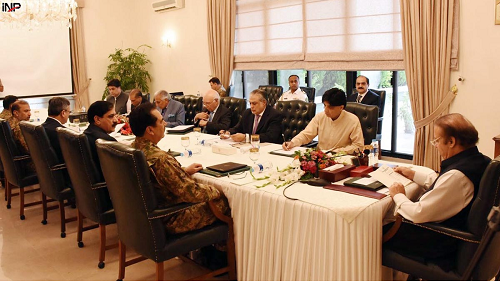 After Army Public School attack on 16th of December 2014, a national consensus was evolved to come down hard on the the terrorists through a concerted national effort. Whereas the National Internal Security Policy 2014 pointed out the broad policy guidelines and long-drawn reforms in various state institutions, a need to felt to chalk out an Action Plan with specific, mostly quantifiable and ultimately time-bound agenda to curb the scourge of terrorism which had by now started massacring even innocent school-age children. A 20 Points National Action Plan (NAP) for countering  terrorism and extremism was chalked out by NACTA/ Ministry of Interior in consultation with the stakeholders and approved on 24th of December, 2014 by the Parliament. After the National Internal Security Policy 2014, it was the 2nd consensual policy document approved by the Government. The National Action Plan, spelled out the specifics for the counter-terrorism drive in the country.

The Prime Minister directed the Minister for Interior to design and implement a national monitoring mechanism for implementation, as NAP involved a number of Federal Ministries and Provincial Governments. NACTA was assigned and entrusted with the role of monitoring body of the National Action Plan. Within NACTA, Director General (CVE) is entrusted with the monitoring of NAP, who is assisted by a Director NAP and other staff.

1. Implementation of death sentence of those convicted in cases of terrorism.
2. Special trial courts under the supervision of Army. The duration of these courts would be two years.
3. Militant outfits and armed gangs will not be allowed to operate in the country.
4. NACTA, the anti-terrorism institution will be strengthened.
5. Strict action against the literature, newspapers and magazines promoting hatred, extremism, sectarianism and intolerance.
6. Choking financing for terrorist and terrorist organizations.
7. Ensuring against re-emergence of proscribed organizations.
8. Establishing and deploying a dedicated counter-terrorism force.
9. Taking effective steps against religious persecution.
10. Registration and regulation of religious seminaries.
11. Ban on glorification of terrorists and terrorist organizations through print and electronic media.
12. Administrative and development reforms in FATA with immediate focus on repatriation of IDPs.
13. Communication network of terrorists will be dismantled completely.
14. Measures against abuse of internet and social media for terrorism.
15. Zero tolerance for militancy in Punjab.
16. Ongoing operation in Karachi will be taken to its logical end.
17. Balochistan government to be fully empowered for political reconciliation with complete ownership by all stakeholders.
18. Dealing firmly with sectarian terrorists.
19. Formulation of a comprehensive policy to deal with the issue of Afghan refugees, beginning with registration of all refugees.
20. Revamping and reforming the criminal justice system.